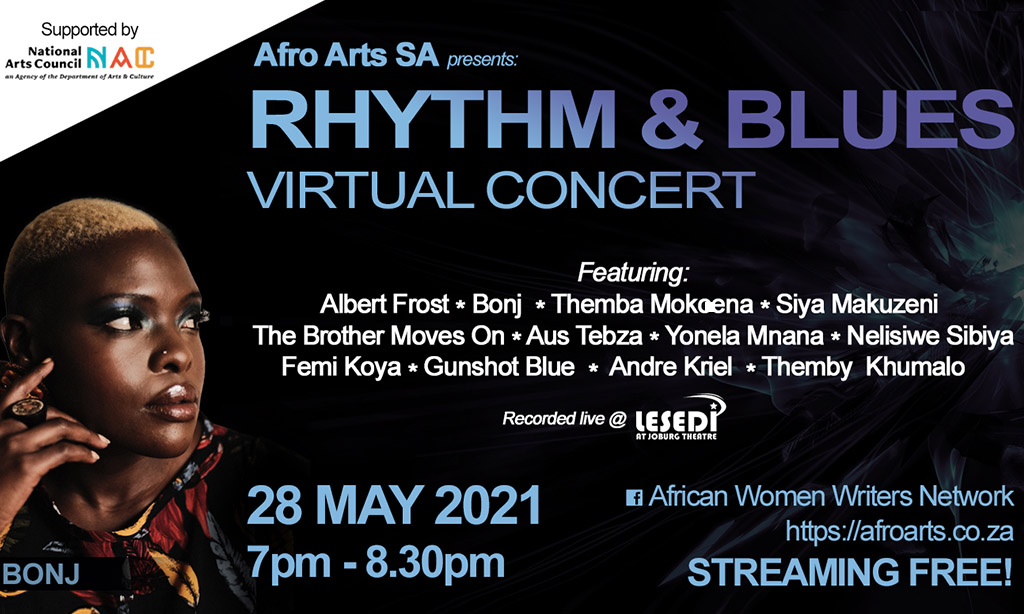 Recorded live at the The Lesedi, Joburg Theatre
Supported by The National Arts Council (NAC)

We invite you to join Afro Arts SA in celebrating Africa Month with an exciting Rhythm and Blues programme on 27 and 28 May 2021. The programme will be streamed via website and Facebook (see above for details) and feature a range of artists that will resonate with the different genres and the different ages of music lovers.

We will be meeting online because of the Covid Pandemic, which has killed over 50 000 South Africans and affected thousands more who are currently in care. In celebrating Africa through musical rhythms and blues, we stand in solidarity with front line workers in the continent who against great odds save lives. We believe music is integral to this journey of survival; healing and hopefully it will inspire us to go through this period marked by social distance.

As customary with Afro Arts SA, there will be an educational and enrichment workshop, this time focusing on songwriting. It will be presented by internationally acclaimed South African artists Msaki, Shekhinah and Vusi Mahlasela. The workshop programme will be streamed on Thursday 27 May 2021, 19H00 to 20H00

For Media Queries and additional info contact JT Comms on media@jtcomms.co.za or 011 788 7632

Brief information on some of the artists who will be featured at the Rhythm and Blues concert and workshop programme celebrating Africa Month:

Shekhinah: SA’s leading woman of song and hits, singer and songwriter Shekhinah continues to produce gold including her latest Fixate. Some of her other hits with artists such as Black Coffee and Sketchy Bongo include Your Eyes and Let me Know. Her album Rose Gold went platinum in 2018.

Bonj: Born Bongiwe Mpanza but better known by her stage name Bonj, her voice is husky and strong, yet rich, seductive and incredibly entrancing. She describes her sound as a blend of electronic music with soulful melodies and groove. She aspires to make music that moves, uplifts and makes people dance. She has been an opening act for Sam Smith and her song “ain’t it true’ is featured in the film Coming to America 2.

Vusi Mahlasela: Known as ‘The Voice’ in South Africa, Vusi celebrated for his distinct, powerful voice and his poetic, optimistic lyrics. His songs of hope connect Apartheid-scarred South Africa with its promise for a better future. Raised in Mamelodi Township, where he still resides, Vusi became a singer-songwriter and poet-activist at an early age teaching himself how to play guitar and later joining the Congress of South African Writers. Vusi has toured globally and shared the stage with Dave Matthews Band, Sting, Paul Simon, Josh Groban, Taj Mahal, among many others. In 2003, fellow South African Dave Matthews signed Vusi to ATO Records and began releasing his albums in North America to great acclaim. Vusi has released nine beloved albums over the last two decades. His latest release is “Shebeen Queen”.

Bra Themba Mokoena: One of South Africa’s most loved guitarists, this living legend has blessed stages across the world with acclaimed artists such as the Sibongile Khumalo, Hugh Masekela, and George Lee among others.

Albert Frost: South African blues singer, rock guitarist and producer Frost has played with The Blues Broers since 1994 at the age of 17. In 2017, he won the SAMA Award for Best Rock Album for The Wake Up. Dubbed the “South African Hendrix”, Frost deftly alternates between rhythm and lead, showcasing his extraordinary skills on the acoustic and electric guitars. In 2000, Frost became one of the first Fender endorsees in South Africa and has been linked with the brand ever since.

Msaki: Possessing one of the most angelic voices. Msaki continues to cross the different genres of music working with a range of leading and upcoming artists, including the likes of Black Coffee, Prince Kaybee, Nduduzo Makhathini and many others. Msaki creates a sound that combines soulful folk with symphonic movements, Xhosa lyrics and African poly-rhythms with portals of sincere improvisations. She plays with an ever-evolving and expanding band of incredible musicians from different musical backgrounds she calls the Golden Circle.

Siya Makuzeni: A dynamic professional South African trombone player, vocalist, lyricist and songwriter, Siya regularly collaborates with A-list South African musicians such as Marcus Wyatt, Themba Mkhize, McCoy Mrubata, Feya Faku, Frank Opperman, Tlale Makhene, Khaya Mahlangu, Phillip Miller, the late Sibongile Khumalo and many more. She is also the bandleader of her own rock band, Ippyfuze. Makuzeni picked up the trombone in 1997 while attending Stirling High School in East London and studied BMus/BMusJazz at Rhodes University & the Pretoria Technikon Music School. She has since toured and performed around the globe, most notably in Italy where she contributed as co-composer and lyric interpreter to the soundtrack of Forse Dio e Malato (Maybe God is ill). Siya works as a session musician and voice-over artist when not performing live.

Yonela Mnana: An exceptionally gifted blind pianist and singer, Yonela grew up in Mamelodi Pretoria. Born in Transkei and schooled in Pietersburg, Mnana’s geographical travels contributed to a rich soundscape including African and western choral styles, Kwaito and R&B, soul and soul, 90s popular music and traditional music. While enrolling for a B.Mus at the  University of the Witwatersrand, he studied music under the tutelage of Marian Friedman and Malcolm Nay (for classical piano studies), Nishlyn Ramanna, Andile Yenana and Mncedi Kupa. Mentorship of bassist Jimmy Mngwandi ushered him into a real-life jazz experience. Mnana has since played with his revered jazz master elders including Zim Ngqawana (2005-6), Feya Faku, Herbie Tsoaeli, Sydney Mnisi, Clement Benny and Marcus Wyatt.

The Brothers Move On / TBMO: Started as a self-proclaimed art movement mainly of graphic and fine artists, the band has since began incorporating instrumentalists for the live performance environment. “The Brother’s sound is a tradition-trouncing trans-Atlantic Afro-centric futuristically ancient fusion that jack knifes between off world spectral dub-metal, hyper rhythmic rock psychedelic, indie-township and astro-afro-free-jazz. Taking a cue from that other “Brother From Another Planet” Sun Ra, they embrace a multi-genre, multimedia aesthetic, re-challenging hip-hop’s five pillars (MCing, DJing, B-boying and graffiti writing) into a concept technic performance art project that incorporates historical, political, and sociological perspectives”, writes Stacy Pan from the African Space Station.

Nelisiwe Sibiya: South African born actress, songwriter, singer and dancer Sibiya is popular for her heartfelt singing and songwriting on Mzansi Magic’s Lockdown. An act to watch, Sibiya has vowed to make music that will move her audiences and inspire introspection. Her energy is infectious and her voice is powerful. The 26-year-old Maskandi Queen hails from Eshowe in KZN. Sibiya is best known for her popular role on the new ETV drama series Durban Gen as Dr Mbali Mthethwa.

Femi Koya: Hailing from Nigeria, Femi Koya is a talented producer, arranger, song writer and saxophone player. He is the new face of the African Renaissance. Combining Afrobeat and jazz, gospel and blues, West African highlife with a nostalgic Sophiatown flavour, his music is a rich blend of deep and sultry jazz and contemporary groove.

Themby Khumalo: Young, talented and a powerful singer, Themby has performed in various stages including Jazz on the Lake, musical theatre shows such as The Gibson Kente Tribute, Town The Musical Revue, The Joseph Shabalala Musical, The Hugh Masekela Tribute, Nelson Mandela Tribute and Letta Mbulu Tribute, just to name a few.

Gunshot Blue: Gunshot Blue is the culmination of thousands of hours of dedication to craft, a fermentation of many uniquely different, yet strangely familiar stories, distilled, steeped and soaked in folklore and tradition. A mysterious and hypnotic blend of the gentle, psychedelic infused blues that occasionally meets the explosive high energy, electricity of rock and roll head on. Gunshot Blue is not just a spirited live performance. Gunshot Blue is a rousing psychoactive baptism. The debut EP “12 396km” was released November 2014. January 2019 saw the release of their debut full length album “Until the last prayer” through the Gallo Record Company, the album was nominated for a ‘Best Alternative’ award at South African Music Award (SAMA) in 2020.

Lindsay McGuire: South Africas’ leading rock and blues singer and songwriter, she has performed over the years with her bands Crystal December and Avalanche. Lindsay has been performing professionally since a very early age and her single ‘Save Me’ reached the +1 spot on 5FM. She continues to perform live and has a dedicated following.