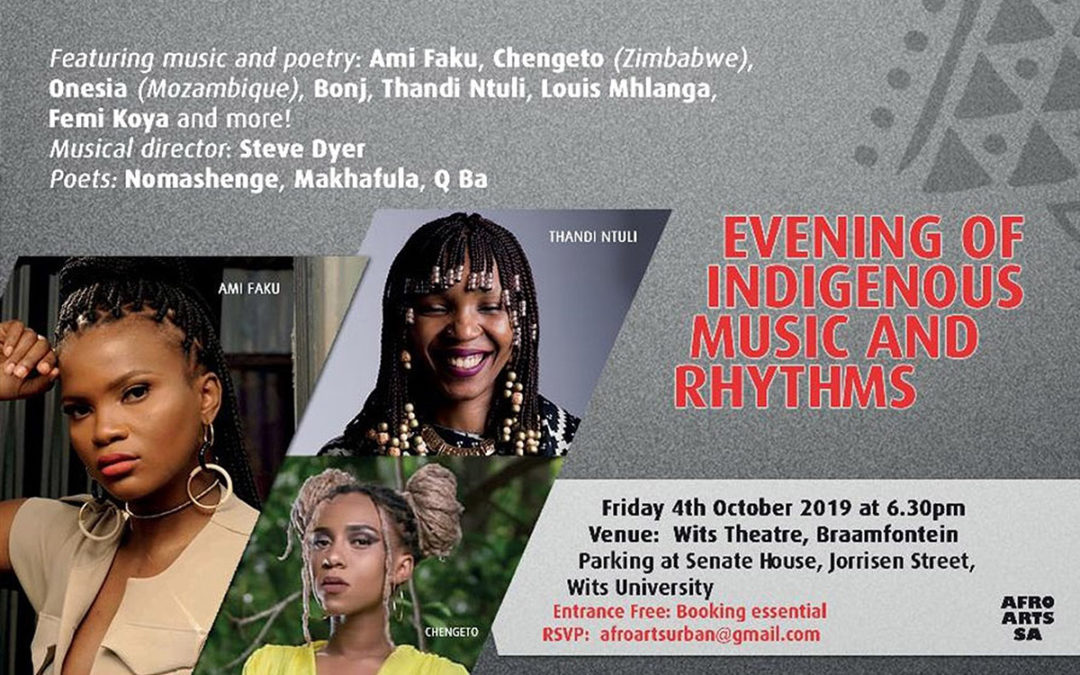 STEVE DYER is a renowned music composer, performer, conceptualizer, director, and producer. Steve studied at the University of Kwa Zulu Natal and majored in saxophone and flute. Refusing military conscription, he then left South Africa and lived in Botswana for 5 years. Here he came into contact with the exile sounds blowing through the horns of Hugh Masekela and Jonas Gwangwa. He helped form Shakawe led by Jonas Gwangwa and played in the band for 3 years, where he immersed himself in the mbaqanga music tradition. His music offering has evolved and his musical experience is diverse. He continues to perform and work with many different musicians in and outside of South Africa. He has produced multiple acclaimed albums and his latest, the highly-rated album is called Genesis of a Different World (2019). AMI FAKU is one of SA‘s leading contemporary singers, who recently received a Gold plaque for her single Into Ingawe which features Sun-EL Musician. This accomplishment comes ahead of the release of the singer’s much-anticipated debut album, Imali. CHENGETO – Chengeto is a Zimbabwean singer, songwriter, and composer based in  Harare.  Born in 1996 to Zimbabwean music icons,  Chiwoniso Maraire and Andy Brown she has been performing since the age of 9. She plays mbira, guitar, and keyboard alongside also being a writer later moved to the USA. In 2016 she moved back to Zimbabwe leading to her second collaboration with Afropop artist and sister  Ammara Brown on their  hit  single titled Wachu Want. ONESIA MUHOLOV is a vibrant Mozambican born singer and dancer. BONJ was born and bred in Soweto. Bonj has been in the music industry for over 10 years. She describes her music as a blend of electronic, soulful melodies and groove sounds. She has been a backing vocalist for Mafikizolo and Nhlanhla Nciza. Bonj has performed with Sharon Dee & Blondie as well as Tresor. In 2018 she was the opening act for the Sam Smith tour. THANDI NTULI was born in 1987 in one of South Africa’s largest townships, Soshanguve (Pretoria). She comes from a lineage of rich musical heritage, being the niece of guitarist, pianist, and the lead vocalist of the 70’s pop fusion band Harari (The Beaters), Selby Ntuli. Since the release of her debut jazz album, The Offering which she released independently, Thandi is fast making an imprint in the local jazz scene with her unique voice. The Offering has received critical acclaim as well as numerous awards and recognition since its release in 2014, namely a MetroFM award nomination for “Best Urban Jazz” in 2015. LOUIS MHLANGA is a Zimbabwean artist based in South Africa, an award-winning guitarist, and producer. Mhlanga became renowned for his guitar skills, and worked with Zimbabwean acts such as Shaka, Talking Drum, Ilanga, Mudzimu, and Oliver Mtukudzi. FEMI KOYA is a talented producer, songwriter, and saxophone player from Nigeria. He is the new face of the African Renaissance. Combining Afrobeat and jazz, gospel and blues, West African highlife with a nostalgic Sophiatown flavour, his music is a rich blend of deep and sultry jazz and contemporary groove. SIBUSISO SIBANYONI is a talented bass player who has been performing with the best of South African and international artists. LUNGILE KUNENE is a talented South African drummer self-taught, multi-instrumentalist who plays drums and percussions.

NOMASHENGE is a Ladysmith born and Durban bred poet-vocalist, and pharmacist. She began her poetry journey in 2005 as a writer and 2007 as a performer. Having shared her work across the country including the Arts Alive, Essence, and Open Book International Festivals, Nomashenge believes poetry to be an Alchemy that continually transforms the world. Her work focuses on themes of self-exploration, blackness, and femininity. Nomashenge’s blend of music and poetry brings forth a hybrid of performance-poetry that speaks to the heart of the zeitgeist. MAKHUFULA – Going by the name Makhafula Vilakazi (the title of one of his poems), Matodzi Gift Ramashia grew up in Chiawelo, Soweto. His poetry is a fusion of Tsotsitaal, English, Zulu and Sotho interspersed into an uncompromising depiction of township life, exploring issues that affect his community such as HIV and AIDS, unemployment, and crime. An exponent of a genre which he calls ‘Kasie Poetry’, Makhafula Vilakazi says his writing is influenced and inspired by the striking similarities of life’s contrasts. Recently, Vilakazi collaborated with renowned, respected, and award-winning South African rapper Tuks Senganga in his album Tshwanelo – an album that was nominated for a South African Music Award (SAMA). QBA – Bold. Fresh. Driven. This is QBA (Cuba), performer, songwriter artist. Based in Johannesburg and coming from a small township, Mzinoni (Bethal, Mpumalanga), this young woman is a relentless go-getter! Boasting a powerful voice, stage presence, and lyrics, QBA is listed as one of the most noteworthy performing artists in South African hip hop history and stages ranging from street social and formal events. Qba strives to stretch the idea of MC further. The plight of women in the world and Hip Hop is a driving force and resounding statement in Qba’s music Qba also appears in the new innovative “Meadowlands 1852 Video Mixtapes” directed by Lizo Sonkwala as commentator and performer. PIECE WRITTEN BY JEFFERSON TSHABALA: well-known South African writer, director and performer who creates works across varied field ranging from orthodox drama to hip–hop theatre.